A fantastic gallery with awesome art for everyone!

Happy 104th B-Day to the Grandfather of Contemporary American Folk Art. The Rev. Howard Finster. Miss you Howard. Thank you for being the Obi Wan Kenobi to my Luke Skywalker. www.HowardFinster.com

The Howard Finster Vision House Museum Located in Summerville, Georgia, the actual place where Howard Finster had his vision from God to paint sacred art and home to over 350 pieces of art in the permanent collection. About Howard Vision House Serigraphs Original Art […]

Today is small business Saturday. The DLG is a small business. You know what to do next...
http://r.dlgalleriesnews.com/va4xep8j9t7e.html?t=1606579614 A very nice Tristan Meinecke oil painting from 1941.
Pre War. Looks great in your collection. PM me for inquiries.

Our Donald Topp promotion of a free icon print for our 600th sale is gonna happen fast. It could be you. We're at #598.

A fantastic start to the weekend. This lady came right in and had to have Princess Tiana! Donald Topp consistently brilliant. #594

Belle found a new home today but Cinderella is available! You've got to give the people what they want and they clearly cannot seem to get enough of Donald Topp art! #586

Donald Topp and Matt Geer will be fantastic additions to a fabulous collection!

Off to a great start! Sam called while I was at the Howard Finster Vision House Museum and I told him I'd be back at the DLG on Saturday. He had his eye on Pam Grier and now he has her. Donald Topp does it again! #581

This is exactly how I like to start off my Saturday by helping people collect Howard Finster art!

I had known of Matt Lamb's art for years in the Chicago art scene. I remember meeting him at an event in the mid-2000s. We started talking and I asked him what he was up to and he said, "I am opening an Art Museum. What are you up to?" I said, "I have been working on my art museum as well, the Howar...

You can hear me say, "The man was clearly inspired by God"! I'm privileged to be in this movie about my old friend Howard Finster. www.HowardFinster.com

Howard Finster, the grandfather of the Southern Folk Art movement, was a pioneer that showed the world that Art can thrive outside of museums and galleries in ordinary… 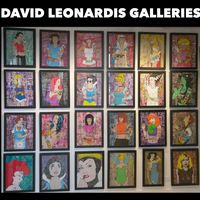 Larry Singer's photography is off the hook! You need some! hmu.

Yesterday was an art tastic day as well! I got a call from an old friend who wanted a Dolly Parton and this man came in at the end of the night looking for the Kramer painting he had seen before. I didn't have the big one but after some searching we found the little one and he was ecstatic. That's what I do I make people happy with art. I take it very seriously and I'm very happy to get to do it! Donald Topp and Maximilian crush it. #544

Artist Donald Topp and Photographer Larry Singer both Love Dolly Parton and here at the DLG we do too!

Right before the snow these two came in and he told her she could have anything in the store she wanted. She wanted Ariel. The heart wants what the heart wants! #540

It was my honor to help Matt with a Christmas present for his girlfriend. He said he aced it! Donald Topp crushes it again. #530

Nire rolls in and picks up her Ariel and decides it's a great time to get Betty too. Donald Topp crushes it again! #529 Tonight I will be having my 28th annual Happy B-Day Howard Finster & Friends show. We will have a custom Finster painting cake. Our feature wall is a stunning Matt Lamb series. Come on out and help us celebrate! This fine gentleman responded to my email about Matt Lamb, ordered an appraisal and then came in and is going home with this fantastic Howard Finster. God Bless America!

My current David Leonardis Gallery sign was used successfully a few years back. A collector recently said he liked this one, so here it is. What's old is new again. And or if your marketing worked before, update it and implement it again!

DLG last night before the snow. Stay warm with our RED HOT ART!

This gentleman is getting a gift for his boss who is a Marijuana Mogul! Funny how now a days that has a different connotation. #514

Our brand new web page for American Idol/The Voice/Blood People, singer/painter Aly Jados looks amazing. Just in time for Halloween her Monster series is vibrant and captivating. Perfect for some Ghoul! Get them while they're here! http://dlgalleries.com/aly-jados/

ALY JADOS Aly Jados is a fantastic painter/musician. You may remember her from her appearances on American Idol and The Voice. Her band Blood People played Riot Fest and continues to tour. I always say an artist who collects art knows how to paint art that sells and Aly has proven me right as she .....

Be the first to know and let us send you an email when David Leonardis Gallery posts news and promotions. Your email address will not be used for any other purpose, and you can unsubscribe at any time.

Now that's a lot of DLG Art that looks better in your house!

The DLG where all the art looks better in your house!

At the height of the Recession in 1990 David Leonardis started collecting art. When he realized he wanted to collect more art than he could afford he got a job working at a gallery. Eight months later, allied with Howard Finster, Chris Peldo, Glenn Wexler, and Andy Kane, he turned a few profitable art sales into a commitment to own and operate the David Leonardis Gallery.

Twenty-eight years later the Wicker Park gallery has not only survived another ignoble recession, but we are at the forefront of 21st century American Art. DLG also carries 19th-century French lithographs and 20th century Contemporary, Pop, Folk Art, and Photography. David’s focus is simple: “I enjoy making people and corporations happy by selling them art.”

The DLG features a yearly “Instant art collection” group show. We suggest that you buy one of each of the artists we’ve chosen to exhibit. This way, individuals and corporations find it easy to acquire a well-rounded collection.

The David Leonardis Gallery here in Chicago also works with the artists and the clients to produce commissions and encourages people to take advantage of its Mastercard/VISA acceptance options or the DLG payment plan. Cash discounts are always available as well, but you still have to pay the tax. It’s our duty as citizen folks.

Come visit David and the friendly staff at David Leonardis Gallery in Wicker Park. Arrive ready to start or expand your personal art collection. We’ll find art that is meaningful to you and that makes you happy. Happy art buyers are what DLG is all about. Come in today – your walls will be happy you did.

Other Art Museums in Chicago