The Palm Springs Historical Society is a non-profit organization and was founded in 1955 by Melba Berry Bennett.

Happy Sunday! Thank you for making our and huge successes. For more tours please see link in bio Piazza Di Liberace was "Lee's" home from 1968-74. From the moment you arrive it's all fabulous! Even the mailbox was an original. We have more fun facts & great Palm Springs history on our walking & bike tours! Link in bio for info 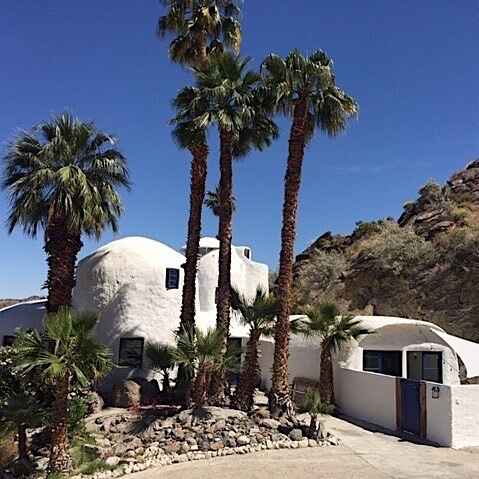 Who’s excited for tours to resume?

Our tours will begin in October, all regular tours will return with two new walking tours being added our schedule. Keep an eye out for more information.

While we are sad to miss you all this season. We have decide to fully open at a later time. Please continue to check our website for updates. Thank you and stay safe!

Limited Bike and Walking tours are now available for purchase on our website. We hope to see you in Palm Springs!

Today we celebrate the 100th anniversary of the 19th amendment being ratified. Enjoy this short piece on Palm Springs and Women’s Suffrage.
https://www.palmspringslife.com/explore-palm-springs-womens-suffrage/

While the museum and tours are closed for the season. You can continue to learn about Palm Springs History through articles written by Tracy Conrad. Check out our website weekly to learn more. Stay safe and in your homes.

Enjoy the stories that share the vibrant past of Palm Springs. Discover the visionaries and spirited people who helped form this desert oasis. The colorful people who lived and played here. In partnership with the Desert Sun. Part of the USA Today Network. Copyright © 2019, The Desert Sun. All righ... At this time we have made the decision to close our facilities to the public.

We are available Monday through Friday 10 am to 4 pm for phone calls.

Thank you and stay safe.

NO TOURS AT THIS TIME
The health and safety of our customers, docents and staff is our top priority. Out of an abundance of caution and concern for our community we will not be offering any walking or biking tours at this time. We will continue to follow the recommendations of the Centers for Disease Control and Prevention and government agencies regarding the current Coronavirus COVID-19 situation.

Our final talk of the season is still happening tomorrow. If you are sick or have health concerns please call Palm Springs Historical Society. Your safety is our priority.

Get your steps in 🚶 Walking tours are a great way to see Palm Springs and learn about its history. The Movie Colony has Frank Sinatra’s home, Robolights and so much more! Sign up on our website.

Do not miss our last “Let’s Talk” of the season. Anthony Purnel will bring the Pacific Crest Trail to life on the big screen as he shares his intimate journey on this legendary footpath discussing the many obstacles and challenges he faced on his 132 day adventure.

One of America's most iconic hiking trails. Designated as one of the first two national scenic trails in 1968, the Pacific Crest Trail (PCT) is a continuous footpath of more than 2,650 miles—from the Mexican border to the Canadian border through California, Oregon, and Washington.

A jewel among our desert neighborhoods, truly demonstrates the creative genius of Palmer and Krisel. Each house appears to be custom built because of alternating facades, changing site orientations and using a variety of rooflines including the dramatic butterfly style.

Modernism Week is here! Want to explore the city? Check out our bike tours 🚲🚲. Friday to Monday 9 am Book on our website.

Who is excited for Modernism Week? 🙋‍♀️🙋‍♂️

"Avanti- Desert-Designed Car" was written on the cover of Palm Springs Life magazine in 1962.

This Avanti Studebaker was designed in one week in Palm Springs by Robert Andrews, John Ebstein and Palm Springs resident Raymond Loewy. Designed in Palm Springs, it was only natural that the desert oasis would be the perfect place to photograph this classic car for advertisement campaign.

You might get to see this gem on the "Rat Pack" walking tour or our brand new bike tours this season.

If you want to learn more about Industrial Designer Raymond Loewy, stop by the museum. We have a special exhibit on him this season. Don't miss out!

Take a step back through time. Join us on Jan 23 for our Let's Talk - The Palm Springs Aerial Tramway Yesterday, Today and Tomorrow. The film Greg Purdy and Cara Youngman are planning to present that night is splendid. Book on our website now! $20 for non members $10 for PSHS members Free for students with School ID

We still have spots available for our walking tours tomorrow!

Tours start at 9:30 am
Cost $25 per person
All tour start at various locations
https://pshistoricalsociety.org/products/tour-7-frank-sinatras-neighborhood-the-movie-colony?variant=30199748558894

Thursday 9:30 am Friday 9:30 am Sunday 9:30 am The Movie ColonyWith the luxurious El Mirador as its centerpiece, the Movie Colony was developed in the 1930s and 1940s. In this tranquil neighborhood lived some of Hollywood’s biggest stars such as Cary Grant, Dinah Shore, Van Johnson, Tony Curtis, G...

Bike like a Star! Join us for our biking tours!

In case you didn’t know... We do tours! - Well, the Palm Springs historical Society Docents do! A two hour tour through several neighborhoods in beautiful Palm Springs. We send you off equipped with an audio ear piece so you can clearly hear wonderful stories about PS, historical facts and the fabulous movie stars that lived and played in our city! -
-

So it begins. On the balcony of the Thomas O’Donnell House. 📸:

Los Compadres brought together local riders from all walks of life

Since November 1939, Los Compadres has been a part of the Palm Springs Community. Tracy Conrad gives a history of the organization in this interesting article.

People entertained themselves, making music, playing sports and conversing. They cared deeply about their friends, amigos, buddies, pals or compadres.

Here's an interesting article on the O'Donnell Golf Club written by Tracy Conrad.

A nomination for historic designation for the buildings and landscape O’Donnell Golf Club goes before the Palm Springs City Council on Oct. 23.

Meet the original 'influencers' who put Palm Springs on the map

Who would be considered an "influencer" in Palm Springs today?

Thanks to the efforts of Frank Bogert, Tony Burke and Ray Ryan, Palm Springs became known worldwide as the place to go and enjoy fun in the sun.

Special Screening of the classic movie, Yours Mine & Ours.

A special evening celebrating the 50th anniversary of this classic American comedy, starring Lucille Ball and Henry Fonda. Guest moderated by Lucille's "Number One Fan" and best-selling author Michael Stern; who will be selling and signing copies of his book "I Had A Ball: My Friendship with Lucille Ball"

*A portion of the proceeds from all ticket sales will benefit The Palm Springs Historical Society.

7-7:45pm - Conversation with Morgan Brittany
*Guest Moderator, Author of "I HAD A BALL" - Michael Stern

VIP Cocktail Reception with Special Guests:
$15.00 (Includes VIP Cocktail Hour plus Book Signing, Conversation segment & Screening of "YOURS, MINE & OURS")

General Admission:
$10.00 (Includes Book Signing, Conversation segment & Screening of "YOURS, MINE & OURS")

We hope to see you there!

Do you remember the Desert Circus?

Gay community has shaped and influenced Palm Springs for decades

Our final "Talk" of the season is titled, "Let's Talk About Gay Palm Springs." The talk is scheduled for April 17, 2018 at 6:00 pm at the Palm Springs Cultural Center. Seating is limited. Tickets can be purchased at www.pshistoricalsociety.org. $10 for members and $20 for non-members. See you at "The Talk."

Whether private or out, the gay community has shaped the history of Palm Springs throughout its storied history

Fashion in the desert is more than just a bathing suit and cover up.

During the mid-century some of the biggest names in fashion were featured in a multitude of high-end shops scattered up and down Palm Canyon Drive.

Herbert Burns was called a "charismatic chameleon." Learn why in this article on the man and his work.

Photographer Julius Shulman was so impressed with Town and Desert Apartments, he wrote about it. Now Preservation Society is feting the architect

A legend in the desert, Harry Oliver also had a sense of humor. Tracy Conrad tells his story in this interesting article.

The publisher of the Desert Rat Scrap Book had a successful and varied career before turning his attention to aphorism and humor.

Be the first to know and let us send you an email when Palm Springs Historical Society posts news and promotions. Your email address will not be used for any other purpose, and you can unsubscribe at any time.

Other History Museums in Palm Springs

Thank you Dolphin Fairs, Palm Springs Art Museum, Palm Springs Historical Society, Palm Springs Modern Committee, and Palm Springs Preservation Foundation for supporting Modernism Week each year!
Vintage PS photo. Looking to identify location and whether buildings are still there. Then we can get to the year, make and model of the vehicles!
Ctiy of Palm Springs Relocate that Statue

According to the 50th anniversary publication (1931-1981) of the Palm Springs Fire Department in 1961, "Several old buildings (on Section 14) seemed to suffer from spontaneous ignition at different times throughout the year. These were no-loss fires, the only loss being in terms of firemen's sleep and part of the city's water supply."

Palm Springs Fire Department Palm Springs City Government Palm Springs Black History Committee
Desert Water Agency and Palm Springs Historical Society are hosting a special webinar at 2 p.m. on September 15 to celebrate DWA’s 60 years of service. The webinar will dive into how water has helped our desert grow and thrive, how DWA came to be and what’s next for the water in Palm Springs. Register for the event here: https://bit.ly/389pd4G 💦
“The Beat Goes On” is one of the most famous songs in American pop music history. Written, composed, and produced by Sonny Bono, and arranged by Harold Battiste, it was first issued as a single in January 1967 and became an instant hit. The song remains in the Billboard Top 100 today. The lyrics, “Drums keep pounding a rhythm to the brain...” can be heard playing on Palm Springs radio stations in memory of former Palm Springs mayor, Sonny Bono ().⁠
⁠
Sonny & Cher started their career in the mid-1960s as backup singers. In 1965 they released “I Got You Babe” and “Baby Don’t Go.” They became an international pop sensation shortly thereafter. They are in the Top 20 Musical Duos of all time by .⁠
⁠
In Downtown Palm Springs, you will find the Sonny Bono memorial statue outside of Ruby’s Restaurant, facing the Village Plaza. A 40-mile stretch of Interstate Highway 10 was dedicated to him on Jan. 10, 2002.⁠
⁠
Oasis Music Festival, an all-genre music festival set for Jan. 27-30, 2022 in Palm Springs, will celebrate the city’s rich live music history with a lineup of acts appearing at 60 venues. Stay tuned as the names of acts are released, and look for our full website release.⁠

Head to the M Weekly blog to see why this Mecca of Modernism remains one of the world’s premier destinations for design buffs: https://mwkly.com/architecture/a-look-at-palm-springs-history-of-architecture-and-midcentury-culture/

"Christmas songs were certainly commercially viable. And Autry introduced and made “Frosty,” “Rudolph” and “Here Comes Santa Claus” known all over the globe and every Christmas season since he first recorded them, these songs are still played, and are practically synonymous with the season itself. In fact, it is hard to imagine the season without those melodies."
Took a Modernism Week tour of Indian Canyons with the Palm Springs Historical Society because I love learning all I can about this terrific town, Palm Springs. 🏠 🌴DRE 02068319
x

Other History Museums in Palm Springs (show all)