The official page for the Herndon Historical Society (HHS). The Society is involved in many activities beyond maintaining the museum.

More details can be found in the Society's newsletters (www.herndonhistoricalsociety.org/newsletterminutesarchive.html), however some of those activities include:

Although the Town of Herndon owns the depot, the Historical Society has from time to time expended funds to help maintain it. The most recent project was the restoration of the original railroad semaphore that is fixed on

More details can be found in the Society's newsletters (www.herndonhistoricalsociety.org/newsletterminutesarchive.html), however some of those activities include:

Although the Town of Herndon owns the depot, the Historical Society has from time to time expended funds to help maintain it. The most recent project was the restoration of the original railroad semaphore that is fixed on

p.s. Have you ever noticed the crosswalk markings in Herndon along the W&OD trail that look like railroad ties? 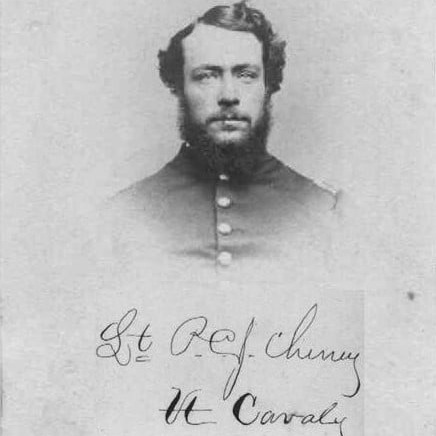 What happened in Herndon, Virginia 159 years ago on St. Patrick’s Day, March 17, 1863? Captain John Singleton Mosby and a band of his Confederate rangers raided the town of Herndon, capturing Union Lieutenant Perley Cheney and the men from his First Vermont Cavalry unit who were stationed here in town. Shown here are photos of Mosby and Cheney.

In the late 19-teens and the early 1920s, it took a while for the of Herndon to figure out where to place their new fire department. This map shows one proposed location, at the northeast corner of Elden and Station Streets (labelled here as Spring Street). Alas, that location never came about and the new fire house was built on the west side of Station Street, where Herndon’s municipal lot is now located.

WHATS NEW AT THE DEPOT?

Shown here is a portion of the new working telegraph exhibit which includes antique telegraph equipment as well as a computer through which messages can be sent wirelessly. Also, outside the depot is a replica Western Union sign, such as the one that was once on the depot in the late 1800s.

Come see all the interesting artifacts that represent Herndon, Virginia's rich history at the old Herndon Depot Museum in the heart of Historic Herndon (open Sundays from 12:00 – 3:00).

An abbreviated history: During WWI, Germany was the first to adopt DST as a way to conserve fuel. Europe soon followed suit, as did the United States in 1918. It was unpopular and abolished after WWI. In 1942 President Roosevelt instituted a year-round DST, which he called “war time.” That ended in 1945. DST became standard in the United States with the passage of the Uniform Time Act of 1966.

Did you know that the old Robert’s Carpet shop at 681 Spring Street in Herndon, Virginia was originally a grocery store built in c. 1949? We do not have a photo of this building when it was a Safeway, but if any of you do we would love to see it!

Speaking of the old High School that used to be on Locust Street (see the previous post from March 3, 2022), we recently found an old photo negative that ended up being a picture of Mildred Williams, a former history and civics teacher at the school. This photo was taken at the 1935 graduation. Ms. Williams was standing on the front grass of the school with her back toward the intersection of Locust and School Street. School Street used to be in line with the front of the school. Herndon Historical Society member, Kathy Gaynor, digitized the negative and also took a comparison photo of what the location looks like today.

The Herndon Depot Museum is now open for the 2022 season! We are open every Sunday from 12:00 noon to 3:00 PM, and at other times by appointment. Hope to see you soon!

Watch this video to see some of the interesting exhibits you will see inside the museum when you come visit! https://www.youtube.com/watch?v=yi7GpJpkZUs

Check out this month's Herndon history article on the history of the Herndon Parkway by Herndon Historical Society Historian Barbara Glakas!

Edward N. Stirewalt's vision for the Herndon Highway was to provide an alternate route so drivers could avoid driving through downtown.

Herndon Historical Society is proud to be a member of the Virginia Association of Museums (VAM)! Check it out at https://www.vamuseums.org/. The Herndon Depot Museum is now listed among museums throughout Virginia and can benefit from the best practices shared through VAM.

Herndon Caboose Park, a popular railroad site along the W&OD Trail, has unveiled a historical placard Saturday that describes Virginia’s segregated past on the railroad.

Herndon Historical Society is now on Instagram! Check us out

Looking for something to do outside on a moderate winter day? Go walking around Herndon to find our town’s historic markers! Here is a website called Historic Markers Database (or HMdb.org). They have a searchable online catalog of “public history cast in metal, carved on stone, or embedded in resin,” including the Town of Herndon’s historic markers! https://www.hmdb.org/results.asp?Search=Series&SeriesID=682

Check out this upcoming history program (with a tractor ride!) on March 12 at Frying Pan Park! Register today at Bit.ly/womenFP. Hope to see you there!

Cool story about finding an old school house in the woods! There was also an article about it in the Post. https://www.washingtonpost.com/lifestyle/2022/02/16/va-schoolhouse-dawn-preserve-enslaved/

Amos Crounse (pictured here in 1875) was born in New York in 1836. He farmed with his father. When the Civil War broke out he left the farm and enlisted in the 152nd Infantry Regiment of the New York Volunteers. Within a month his unit was stationed in the defense of Washington. The unit was subsequently assigned to defend Suffolk. Next, the unit returned to New York during the draft riots of 1863. Later, the unit joined the Army of the Potomac, where it fought in many battles, including a series of battles in the Wilderness Campaign.

Amos was promoted to Corporal in 1863. Several times he was selected to act as a recruitment officer in the early months of 1864. But shortly after his return from one of his recruitment trips, he participated in the Wilderness Campaign and was wounded in the Battle of Prospect Hill in May of 1864, necessitating the amputation of his left hand. Due to his disability, he was honorably discharged from the military in 1865.

He got married in 1866 and they came to Herndon in the early 1870s. They lived at 642 Madison Street (house pictured here in 1905) . Amos and his wife Bella ultimately had ten kids. He served on the Herndon Town Council from 1880 to 1885. He also worked at the Treasury Department in Washington D.C., where he spent 42 years in civil service. He died in 1920 and is buried in Arlington National Cemetery.

His trunk shown here was recently sold at auction.

A group of dedicated Herndon Historical Society volunteers helped clean up the Herndon Depot Museum for its annual “spring cleaning” in preparation for the museum opening on March 6. Thank you volunteers! Can't wait to see everybody on Sundays from 12-3!

NOVA Parks will be conducting a ribbon cutting for a new interpretive panel along the W&OD Trail near Herndon's caboose. The panel will tell the story of how segregationist laws affected passengers on the W&OD Railroad. We invite you to attend the ribbon cutting which will take place on Saturday, February 26, at 10:00 AM.

Happy Black History Month! We would like to honor Archie Turner Shirley (1863-1965). Mr. Shirley was a Herndon resident, a prominent member of Herndon’s Oak Grove Community, a teacher, and the Grand Master of the Order of Odd Fellows lodge in Herndon. The Odd Fellows lodge was once located on what is now Dominion Lane in the Oak Grove section of Sterling. Such societies were developed for literary improvement, social activities, and for the mutual aid and protection of its members in case of sickness and distress. Mr. Shirley also served as the Grand Treasurer of the National Grand United Order of Negro Odd Fellows. He can be seen in this 1908 group photo, in the back row, second from the right. (Photo from the National Museum of African American History and Culture).

A Herndon family visits the Herndon Depot Museum on a rainy February day! Although the museum won’t officially re-open for the 2022 season until March 6, you too can schedule an appointment for your family or friend group to come visit us by contacting us at [email protected] .

Found in the Library of Congress photo collection is this 1920 photo of a Herndon woman. The poster shows that there is a personal property public auction taking place on the Darlington property in Herndon. The auction is dated November 1920. Joseph J. Darlington – a prominent D.C. lawyer who had a summer estate in Herndon - died in June of 1920. We are not sure who the woman is in the photo but she may have one of the Darlington daughters who, in 1920, would have been in her 30s. This photo would have been taken in the vicinity of where Herndon’s Walgreens store is now located, looking northwest.

"Why I Love Thee
"In thy face I read thy sweetness,
In thy voice I hear thy gentleness,
And in thy ways I see thy goodness.
I love thy looks, for they tell me
Thy mind from evil thoughts is ever free,
I love thy voice, for it tells me
Thy tongue from unkind speaking always keeps,
I love thy ways, for they tell me
Thou art good and true and kind.
And I love thee, because in thee
I all this goodness find."

Read about the history of this beautiful poem about more in this month's Herndon history story! Just in time for Valentines Day!

Barbara Glakas of the Herndon Historical Society shares a local love story from the 1800s.

Be the first to know and let us send you an email when Herndon Historical Society posts news and promotions. Your email address will not be used for any other purpose, and you can unsubscribe at any time.

Other History Museums in Herndon

Are you REALLY open on Sunday as today's Facebook post says?
Here's an old photo, ca. 1940 give or take a couple of years. The car belonged to Herndon Fire Chief Walter A. Farr. You can see the FD (Fire Department) emblem on the car grill, and sirens, extra lights. The license plate tag 'topper' has CAMP LEE. Chief Farr moved to Petersburg, VA ca. 1941 and worked as a machinist at CAMP LEE. I'm not sure whether this photo was taken at his residence on Spring St. in Herndon, or in Petersburg. His two daughters are pictured, Cathleen (second from the left) and Louise (second from the right). The other girls are unidentified.
Love this Old Town and appreciate all the work of the Herndon Historical Society❤️
http://hctv.org/2019/03/new-chats-with-charlie/
Herndon High
Dr Charles Russell, Herndon physician
Herndon library "little helpers" 1931
Benjamin D Utterback obit from Oct 1899. Quite an interesting story of bravery at the end of the War Between the States. Mr Utterback prior to enlisting with J. Mosby was incarcerated as a citizen for conspiring with the enemy. When released he joined Mosby's Rangers.
Postcard. Still there?
Back of picture says Old Stone House, home of Olive Wrenn. Does anyone know where this home is?
Herndon, Va
Fairfax 1909
x

Other History Museums in Herndon (show all)