The former home of Emmeline Pankhurst and the birthplace of the suffragette movement. Now a museum and Grade II listed building. Free and open to everyone.
(3)

This modest Georgian town house was the Manchester home of the world famous leaders of the Suffragette Movement, whose militant protests were instrumental in the introduction of voting rights for women during the Edwardian era. Mrs Emmeline Pankhurst, and her daughter Christabel together formed the Women's Social and Political Union in 1903, after Emmeline's daughter Sylvia had been invited by a m

This modest Georgian town house was the Manchester home of the world famous leaders of the Suffragette Movement, whose militant protests were instrumental in the introduction of voting rights for women during the Edwardian era. Mrs Emmeline Pankhurst, and her daughter Christabel together formed the Women's Social and Political Union in 1903, after Emmeline's daughter Sylvia had been invited by a m 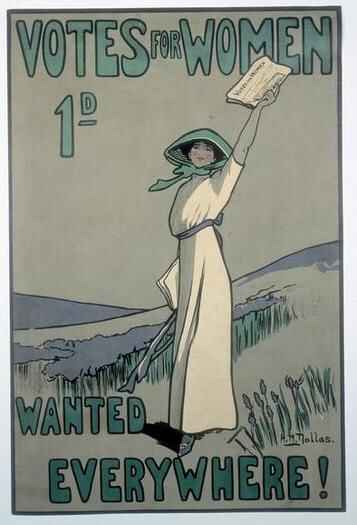 Give everyone in safe houses the right to vote.

Give everyone in safe houses the right to vote.

I have found it impossible to register to vote as I live in a Safe House in Bristol. With the local elections happening right now, and the EU referendum coming up, I'm left without a vote, without a voice, without a say on local Councillor appointment, City Mayor, the Police Crime Commissioner posit...

"Women of today and the Suffragettes have a LOT in common."

Suffragette - the film's screen writer, Abi Morgan, and its historical advisor, Professor Krista Cowman, on bringing the fight for women's right to vote powerfully to life on screen.

Visit us where it all began - Open Weekend this Sat/Sun 10th & 11th October.

Here's What The 'Suffragette' Stars Made Of The London Premiere Protests

After all, dead women cannot vote.

The cast of ‘Suffragette’ have praised protesters who demonstrated at the movie’s London Film Festival premiere on Wednesday night, commending the group - who were later revealed to

Come and have a cream tea in "Emmeline Pankhurst's Parlour" at the Pankhurst Centre this Wednesday, 7th October.

Have high tea with Christabel Pankhurst, the famous suffragette. Ask her questions about women's suffrage and the fascinating history of the centre.

Look around the museum. Perhaps buy a keepsake. Eat cream scones and cucumber sandwiches. Have your photograph taken with Christabel by The Pankhurst's blue plaque.

Find out how to volunteer for our charity in one of the many roles we have to offer, from the Heritage Centre to the foodbank.

Above all, come and see us and enjoy some cake! 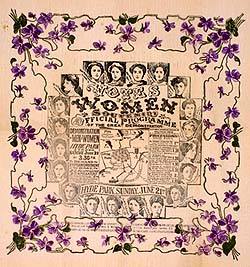 Did you know that suffragettes were famous for their use of spectacle and when they held important events or parades often used white fresh cut flowers as part of their display?

Thanks to the support of Venus Flowers, our Manchester High School suffragettes will be suitably and beautifully floral at the charity premiere of Suffragette on Friday.

“I am a humanist, I am for nice, easy balance.”

- How Meryl Streep answered, when asked if she were a feminist.

What do you think? Was she right or wrong not to use the "F" word? We've done it! Our charity première of Suffragette is a sell-out! THANK YOU to everyone who has bought tickets to support us.
On this night, people of Manchester and beyond will come together to celebrate and honour the women chronicled in the film: the Suffragettes who fought for, and won, the vote for women nearly a century ago.

We are thrilled that Dr Helen Pankhurst, great granddaughter of Emmeline Pankhurst, will be joining us at the screening and, together with Stella Duffy (writer, theatre maker and Women’s Equality Party Campaigner), Jess Lishak (University of Manchester) and Farrah Storr (editor of Cosmopolitan Magazine) will answer questions on the Pankhursts, the Suffragettes and the ‘legacy’ of women’s suffrage in relation to the wider women’s movement and contemporary struggles to tackle gender inequality and injustice.

This really will be a very special evening. Angel Square will be lit up in WSPU colours on the night and keep an eye out for our suffragettes, who will be dressed by Venus Flowers.

If you’re a bit far from Manchester or just didn’t bag tickets in time, the film is on general release from Monday October 12th. Or catch the World Premiere as it opens this year’s London Film Festival.

And everyone is welcome to come and see where it all began, in the parlour at 62 Nelson Street, where the very first meeting of the Women’s Social and Political Union (WSPU) took place. The grade II listed building that is now known as The Pankhurst Centre.

Whether you’re booked to see the film in its first week or still buzzing from the premiere, come and see us at our open weekend on 10th/11th October, where we’ll be opening our doors to all who’d like to come and sense the history of this iconic place. Bring your daughters, bring your sons, have a cup of tea! This is where it all began, almost 100 years ago…

‘It was like time travel. It reminds you just how courageous the suffragettes were’


To attend the Charity Première of the film, click here - http://bit.ly/1MgfPgj

A film out next month tells the story of women’s emancipation, and Helen Pankhurst has a small role. As the great-granddaughter of the woman who founded the suffragette movement, it was a chance to mend a family split

The garden, with the MRI in the background.

Some of our tireless volunteers, en route to the Volunteer Awards.

About the Pankhurst Centre

Squatting to be saved

Christabel Pankhurst, along with her mother Emmeline Pankhurst, was one of the driving forces of the Suffragette movement. Christabel had a sister, Sylvia. However, Sylvia left the movement when Emmeline expressed the view that a patriotic Suffragette should help the war effort. Sylvia was a committ…

Have you visited the Pankhurst Centre yet? We are open Sunday, September 13th as part of the Heritage Open Days weekend.

Come and stand in the very parlour where Emmeline Pankhurst held the very first meeting of the WSPU* and breathe in the history.

Then learn about how, in the 70s, this now Grade II listed building was saved from the bulldozers by the grit, determination and sheer bloody-mindedness of the local people.

Today it is a museum and community space that supports and promotes women's rights, with an eye on the future. Watch this space.

Be the first to know and let us send you an email when The Pankhurst Centre posts news and promotions. Your email address will not be used for any other purpose, and you can unsubscribe at any time.

Send a message to The Pankhurst Centre:

Other History Museums in Manchester