Remnants of the old LIRR freight spur which ran to a Ronzoni macaroni factory, just south of Northern Blvd in Long Island City.

If you weren't careful, you'd pass right by this cemetery, which dates back to before the Revolutionary War, in Woodside, Queens. The Moore-Jackson Cemetery sits on a tiny plot of land on 52 Street near 31 Avenue, and is owned by the Queens Historical Society. At one time the Moore family owned property that stretched from this area all of the way to the East River.

Most likely this is one of the older buildings in the eastern part of Astoria. Originally a lodge for the fraternal/service organization called the Loyal Order of Moose, the building now holds Centro Espanol, a social club / restaurant focusing upon the cultures and cuisines of various parts of Spain. I've long known that there used to be a community of Spaniards in Astoria, but don't know much about them. I love the font used by the Moose.

Have you visited the Socrates Sculpture Park in Long Island City? It's a beautiful, waterfront space where sculptors build and display their art. Unlike most art exhibits, here you can touch, sit upon and stand in the fixtures. Tony and his wife had their wedding pictures taken here.

We do tours for the public, organizations and individuals. Recently Tony conducted a walk though Brooklyn Heights for a native New Yorker who wanted to do something different with a friend visiting from London. They had a great time. If you want to give a unique gift to someone, why not arrange a private tour with us?

This now unoccupied building on West Third Street was once a station house for the New York Fire Patrol, an entity completely separate from the FDNY. Paid for by assessments on fire insurance policies issued to commercial buildings, the Patrol's chief jobs were to assist the Fire Department with search and rescue operations, to cover equipment and merchandise with special tarps to minimize water damage, and to stand watch after a fire to prevent anyone from entering the premises.

For many years there have been rumors that this particular station was haunted by the ghost of a Patrolman named Schwartz.

Back when the Patrol was operational our Cobble Hill tours would end with a stop at their station house on Amity Street. The Patrol personnel were always friendly and happy to discuss their work.

Our guides have deep roots in this town. Tony's Italian great-grandparents settled in this Williamsburg tenement circa 1900.

Almost every ethnic group which has settled in NYC had a network of cultural and benevolent societies. Here is one for the Maltese community. It is located on Hoyt Avenue in Astoria.

Ward's and Randall's Islands have come a long way from the day when they were best known for institutions and a waste water treatment plant. Here are some pictures of parkland on the islands taken by Tony on a recent bike trip. The marsh which is transversed by a small footbridge is what remains of the Little Hell Gate, which was the body of water which separated Ward's and Randall's. It has since been largely filled in. Germans and Spaniards in Astoria? Trinity Lutheran Church on 31st Avenue was built in 1890 at a time when many Germans lived in the community. It's still going, but services were switched to English in 1920. About half a block away from Trinity is Casa Galicia, a private club/restaurant built in 1940 which has served Spaniards as a home-away-from-home. At one time there were quite a few people from Spain in Astoria, and I recall when they had another social organization, as well as a small deli near 41st Street that sold authentic products from Spain.

Found this funky little house in Astoria on 44 St between Broadway and 34th Avenue. Looks like a converted garage. Cool, offbeat buildings are all over our town; you just have to keep a look out for them. 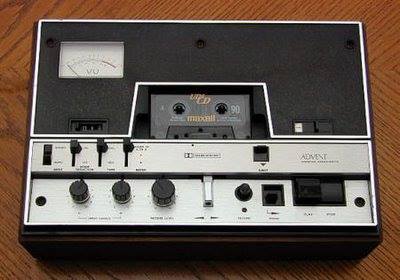 Who had one of these?

The introduction of stereo cassette decks in the early Seventies was a true revolution, allowing us to copy our friends' LPs, make mix tapes for parties and record quality music from the radio. Pictured above is the Advent 201 - one of the first models to feature high-quality sound and Dolby noise reduction to help eliminate tape hiss. I had a TEAC model, which I purchased in 1974 for $200 at the Kings Plaza Mall.

Originally the cassette was a low-fi medium, used mostly to record meetings and dictation. Serious music listeners used 7 or 13-inch reel-to-reel machines, which recorded at either 7.5 or 15 inches-per-second on 1/4-inch tape. There were even a few albums released on reel tape; my cousin had one by Santana. Then there was the 8-track cartridge, about which I'll do a separate entry shortly. 8-track cartridges usually came pre-recorded, and most folks listened to them in automobiles. Few decks existed which could record them.

One of the great things about the cassette was that its patent-holders insisted that the format be standardized. Any cassette could be played on any deck or player. With time, advances in technology allowed for the tapes to hold four tracks : two stereo tracks for each side. But it was Dolby B noise reduction that really made the cassette a serious music resource. The principal was simple: boost the high frequencies in the recording phase, then lower them back for playback. This substantially lowered the annoying hiss heard in the background. A good cassette could also hold up to 45 minutes per side, which meant a tape, costing between one and two bucks, could hold two albums.

Not surprising, people were soon using cassette decks to copy their friends' albums, and to make copies of their own collections to be played back in their cars or on portables. As the 70s moved on, the 8-track format faded, and more and more cars were coming with cassette players. Also, around 1974 came the early "Ghetto Blasters," as boom boxes were then called. These monsters ate batteries at an incredible rate, and cost upwards of $200 back then! Still, they were popular for those of us who liked to hang around outside. My friends and I spent many an evening hanging out in the park listening to the Grateful Dead on my Panasonic.

Another factor contributing to the hi-fi cassette's popularity was the state of FM radio. The Seventies saw the peak of quality radio on stations with either no play lists or rather broad ones. All on FM, these stations did not feature disk jockeys who talked over the music, making it possible for us to tape music instead of buying records. Also in the early Seventies came the advent of live concert broadcasts, both on FM and television. Who can forget ABC's "In Concert" or NBC's "The Midnight Special?" I recall seeing a rather humble-looking singer/songwriter named Billy Joel making his debut on one of these shows. 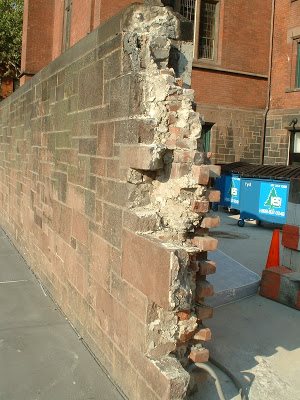 How many buildings in NYC are constructed out of brownstone?

The answer: NONE! Brownstone, a type of sandstone with a high iron ore content that gives it its distinctive brown color, is used as a veneer, typically over the brick front of a building, as these photos of a wall at General Theological Seminary in Chelsea will show. Sandstone is porous, and not strong enough to use as an actual construction material. But, when properly maintained, it certainly creates a handsome facade. 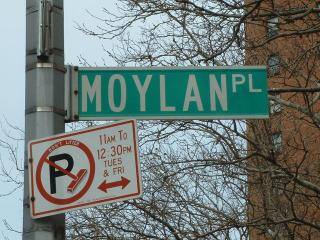 We're not sure if Moylan Place in Morningside Heights is actually the shortest street in NYC, but nobody's been ever to tell us of one that beats it. Running beneath the IRT #1 train viaduct just south of 125th Street, Moylan Place essentially connects the uptown side of Broadway from the downtown side.

It is possible that the street did extend a bit further. On the east side of Broadway where Moylan ends is a large housing project, and on at least one map we've seen the street extends a bit further.

In the meantime, if you meet somebody you can't stand and they ask where you live, just give them 1 Moylan Place.

These shots were taken in DUMBO, the former warehouse district located near the Brooklyn waterfront between the Brooklyn and Manhattan Bridges. At one time it was very common to have freight trains running along city streets, and you can find remnants all over. For example, in Bushwick we've spotted the remains of old grade crossing signs warning pedestrians and motorists of train tracks.

This statue of Shinran Shonin (1173-1263) stands in front of the New York Buddhist Church, 331 Riverside Drive, near 105 St. Shonin was the founder of the Jodo Shinshu school of Buddhism, what Buddhists refer to as a "Pure Land" tradition.

The statue originally stood in Hiroshima, and was one of the few structures there which survived the bombing of said city.

Born and raised in the Bronx, Vince is a local history, politics and sports trivia fanatic who can direct you to unique eating and drinking establishments, public art and parks. He currently lives in Manhattan, where he can often be found exploring Riverside Park with his dog, Hennessy.

Tony grew up in Brooklyn, and has enjoyed wandering this town since his high school days. Years before people were talking about "revitalization" he conducted a study of brownstone renovation in Downtown Brooklyn that won him an Honors grade from Columbia University. Tony's passions include oral history, historic preservation, ethnic and religious enclaves and row house architecture. He's now residing in Sunnyside Gardens, a unique historic community, In Queens.

Between the two of us we've amassed five masters degrees from schools ranging from Columbia to UC Berkeley to the City University of New York.

Be the first to know and let us send you an email when Historic New York Tours posts news and promotions. Your email address will not be used for any other purpose, and you can unsubscribe at any time.