My Art Boston offers custom tours for clients who prefer a personalized art experience. Explore the museums and galleries of Boston with a professional.
(1)

-Favorites at the Museum of Fine Arts, Boston
Let us show you our personal selections. Hand-picked from diverse artistic periods.

-Tours for Kids! Kids can travel the globe as they search for treasure within the museum. Learning is fun when we scavenge with clues. Art projects, books, and stories from across time and place.

-Favorites at the Museum of Fine Arts, Boston
Let us show you our personal selections. Hand-picked from diverse artistic periods.

-Tours for Kids! Kids can travel the globe as they search for treasure within the museum. Learning is fun when we scavenge with clues. Art projects, books, and stories from across time and place.

Gothic cathedrals are among my top five all-time favorite artworks. Photos from the cathedrals in Geneva and Lausanne from a recent working trip. Remember! My Art plans itineraries for professionally guided AND self-guided travels abroad.

A few images from the American Ceramics exhibition on view now at the MFA, that traces the creation of art pottery during 'the long twentieth century.' A great demonstration of the changing tastes and experiments in ceramics in the US over the past century-- from Asian inspired, to Southwestern, to Modernist experiments with form and gesture, and ending with some post-modern humor. Had the chance to tour this small but powerful show with a client last week. I'd love to tour it again! -Christina A few images from the impressive Hokusai exhibition at the MFA, on view now. Centering around Hokusai's famous series of 36 Views of Mount Edo, the exhibition demonstrates the 19th century woodblock printmaker's range and talent. Drawn entirely from the MFA's collection, the show is thorough but can become tedious because of its breadth. See the highlights with a private guide from My Art Boston, starting at $89.

This spring in Boston.... we are offering a range of custom art experiences. Take a gallery walk with us in SoWa to see Modern and Contemporary Art, or see one of the spectacular exhibitions at the MFA!!

What are your favorites? What would you like to see on a tour?

What are your favorites? What would you like to see on a tour?

Pardon the Interruption... My Art's Italian Tour - My Art Boston

Italian art destinations like Rome and Florence can be overwhelming. My Art can help you create a meaningful tour to cut through the beautiful clutter.

Permission to be Global: Latin American Art at the Museum of Fine Arts, Boston | My Art Boston

Nick Cave at the Institute of Contemporary Art (ICA): Soundsuits, Paintings and Rescues | My Art...

The writer and artist Andr� Breton ended his 1928 Surrealist novella, Nadja , with the phrase:� ?Beauty will be CONVULSIVE or will be not at all.? It?s a phrase both direct and cryptic, and it echoed in my mind when I recently visited an exhibition of Nick Cave?s Soundsuits and new sculptural works…

Bahar Yurukoglu at Hallway Gallery, Jamaica PlainPosted on March 23, 2014 by My Art BostonI popped into the Hallway Gallery on South Street in Jamaica Plain yesterday. Their current show Wyomingintrigued me from the sidewalk for a week or so, with a cowskull, gold chain and some plexiglass suspende...

The Museum of Fine Arts in Boston is near encyclopedic - you'll find artworks from all over the globe, ancient to contemporary. The building itself is a treasure, built by Guy Lowell as a classical temple to the arts. Here are some of our favorites from the permanent collection -- a few classics and some hidden gems as well. For a private tour call 617.893.6337 and please see our website for more information www.myartboston.com

The Boston Globe reviews "Permission to be Global," Latin American Art at the MFA.
http://www.bostonglobe.com/arts/theater-art/2014/03/20/mfa-latin-american-art-exhibit-good-worth-second-look/jWR4CHeKwZT9MVg5J7iyBN/story.html

Tightly packed but brilliantly set out, the first exhibition ever devoted to contemporary Latin American Art at the Museum of Fine Arts warrants repeat visits. Called “Permission to be Global/Practicas Globales: Latin American Art from the Ella Fontanals-Cisneros Collection,” it comes to the MFA aft...

"Teaism is the art of concealing beauty that you may discover it." - Sen No Rikyu, Tea Master

Japanese wabi ceramics are humbly beautiful, and intentionally irregular. Learn more with us!

I'm so pleased to be featured by the Boston non-profit GLOW as one of their Organized Women!! GLOW empowers girls and young women by facilitating programs that the girls themselves dream up. Its a cool concept.

Please check out my interview, where I talk about my experience with My Art Boston:

Boston GLOW is a breeding ground for the modern day superwoman. GLOW fosters opportunities for women of all ages to become empowered community leaders and active world citizens.

Open StudiosPosted on February 24, 2014 by My Art BostonIn 1971 Daniel Buren, an artist himself, issued a sort of manifesto against the artist’s studio – not any studio in particular but the idea of one. Like a good Marxist, he believed that we have become alienated from the nature of production. T...

Monument Blindness: Reconsidering CopleyPosted on February 5, 2014 by My Art Boston In graduate school I took a course given by the woman who literally wrote the book on public art. It was during that course that I made one of the bigger mistakes of my graduate career in selecting a public “sound ar...

Clamoring for a last look at the John Singer Sargent Watercolors show today at the MFA Boston.

SO YOU WANT YOUR KID TO DIG ART

In my experience with showing art to children, enthusiasm is an overriding factor -- the enthusiasm of a parent or guide, that is. A child will meet your level of excitement up to the point they sense insincerity. So, my first point of advice is to show them things you really like, until they are able to formulate their own tastes in art. You can help them along that path to personal taste by simply asking about their "favorite" artwork after each or any art outing. Kids never seem to tire of this "game," and it leaves them with a real feeling of agency and authority. The obvious follow-up to that is: "Why did you like it?" Accountability!

Which brings me to a second point: questions. Again, not the child's questions, but those of parent or guide. Ask them questions. These shepherd a child to a more profound, and less superficial understanding of an artwork. The painting is blue - so what? Ask your child why an artist might have chosen that particular hue. Open-ended queries like that one are just fine, but if you're looking for a deeper learning experience, ask leading questions. So, if you're viewing a seated Buddha think hard yourself about why the artist has made every little decision, and what that tells us about the time and place in which it was made. You might say, in order to lead up to an explanation of meditation: "Why does a person sit down? How does it make you feel to sit? What kind of clothing is he wearing? Does it look expensive? Or comfortable? Who have you seen wearing a robe like this? Is this the same size as a real man? Or bigger or smaller?" Instead of just inquiring, "What do you think about this sculpture?" (By the way, leading questions are great, but questions where you have a very specific answer in mind are kind of unfair, especially in any classroom situation. That kind of query can leave a child feeling defeated as they often won't get it right, so find a middle ground.)

For children younger than four, colorful abstract art, public art and animals are usually a hit, if only for a minute. And bigger is usually better. We all like to be dazzled, right? There are plenty of places where toddlers can gambol about without danger to themselves or artworks in the Museum of Fine Art in Boston and the Metropolitan Museum in New York. Sculpture parks can be ideal in gentle weather. Those suggestions (abstract, large, animals) hold up for older children as well. Kids in general are less skeptical of abstraction as they haven't been indoctrinated into thinking that art equals a certain kind of skill in realistically reproducing the world around us. Instead they seem receptive to the emotional possibilities of simple lines and colors and shapes. So head for modern and contemporary wings in the museum or seek out some gallery shows.

Children love ancient art. Ancient Egyptian art always delights kids in tours. Egyptian gods in artistic depictions had animal heads, and it is a simple fact that mummies are cool. Hieroglyphics are intriguing to kids and they can attempt to stand in twisted profile like the figures in Egyptian relief carvings (head profile, shoulders frontal, feet profile - try it). I've found that children are surprisingly open to thinking about the Egyptian beliefs about death and the afterlife, and are very rarely troubled (and more often thrilled) to be in the presence of ancient human remains. This depends, as any parent knows, on the attitude with which you present the it: "This is amazing, and although we don't believe these things any more, the Egyptians spent a lot of time thinking about what they would need when they died -- including their bodies!" For very sensitive children, Egyptian galleries can be rather dark and dramatic, but even those little folks can enjoy with the proper approach.

Ancient Greek and Roman art is a perennial favorite with children. These cultures were driven by myth, which makes storytelling easy in these galleries. Have kids search for familiar characters and retell their stories. Here's a hint: Hercules is often carrying the skin of the Nemean lion. He's also, almost always, nude. The point of nakedness may or may not come up with children in these galleries. If they don't seem to notice, I don't make a thing of it. Sometimes they do, and adults should not shy away from addressing nudity in art. The easiest way I've found is by explaining one of the most important aspects of Greek culture: humanism. The Ancient Greeks believed that the human being was the absolutely most amazing thing that had ever existed - anywhere ever! Their gods acted like humans, their buildings were built in the same proportions as human bodies, and they loved to sculpt beautiful human forms. We obviously don't walk around showing our bodies in this way, but neither did they for the most part. Nudity was for art and athletes. But they knew, as we do, that it is important to respect the wonderful reality of human beings and all their parts.

If you're quite familiar with a museum or exhibition, send children on scavenger missions within your sight. My Art Boston can help with this kind of activity, and we also bring along books, games, stickers and stamps, puzzles and projects to spice up the tour. Those things are not a necessity, but they certainly make an art experience memorable. 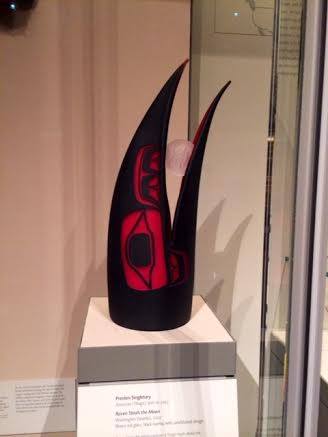 On the Northwest Coast of North America the Tlingit myths center around the Raven Cycle. This contemporary sculpture of the Raven stealing the sun has all of the bold contouring and abstraction of the Tlingit totem pole.

Be the first to know and let us send you an email when My Art Boston posts news and promotions. Your email address will not be used for any other purpose, and you can unsubscribe at any time.

Send a message to My Art Boston: