The Croydon Natural history & Scientific Society was founded in 1870, as The Croydon Microscopical Club For the Public Benefit, to encourage the study of the sciences,especially the local history, and Archaeology of the Croydon area, by organising lectures, members' talks,discussions, and by maintaining a library and museum.

Our event programme for 2017

Details of our events programme from April through to October are now up on the website... https://cnhss.co.uk/our-event-programme-for-2017/

We arrange two full programmes of events, covering about six months each and running from April to October/November, and then again through to March. The listing below covers October 2016 through …

found this today on another fb site

Don't miss this weeks talk by Helen Gristwood, based on her extensive research on the Brookwood Asylum just outside Woking. 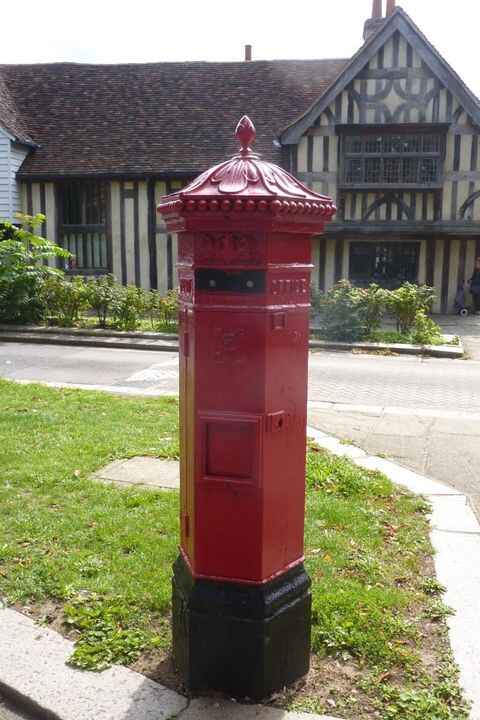 A trip to Walthamstow: Frank Lloyd's 'other' Lloyd Park, and the William Morris Gallery.

Senior Finds Specialist Lyn Blackmore presents her paper ‘Beneath the Strand and theatre-land - insights into Anglo-Saxon London, AD 400 to AD 886’ to the Croydon Natural History and Scientific Society.

Senior Finds Specialist Lyn Blackmore presents her paper ‘Beneath the Strand and theatre-land - insights into Anglo-Saxon London, AD 400 to AD 886’ to the Croydon Natural History and Scientific Society.

Yesterday was our 145th birthday - so we got ourselves a new website! www.cnhss.co.uk - hope you like it. There are more developments planned, but for now it gives us a new 'window' to the world... :-)

"...the personal feeling and native instinct of me had been fastened, irrevocably, long before, to things modest, humble, and pure in peace, under the low red roofs of Croydon, and by the cress-set rivulets in which the sand danced and minnows darted above the Springs of Wandel." Happy birthday John Ruskin!

Saving a Century 2015 - The Victorian Society

A touring exhibition on "the battles that the Victorian Society has won and lost since its foundation" arrives at Croydon Central Library on Wednesday through to early March. 'Saving a Century': more details http://www.victoriansociety.org.uk/events/saving-a-century/

Saving a Century is the Victorian Society's free travelling exhibition, showing the battles that the Society has won and lost since its foundation. There is no need to book for this event. You can view Saving a Century at the following venues in 2015:

JOHN HICKMAN: Why Croydon's graveyards are a key part of our borough's history

From one of our Council Members...

IN HIS latest column, local history buff John Hickman explains his fascination with Croydon's graveyards... CROYDON church graveyards and cemeteries may be seen as sombre places. However, they play a...

Letter to the Editor: "With fireworks popping and whizzing all over the place, and news of a fireworks factory explosion in Staffordshire, this is a good time to remember South Norwood’s place in pyrotechnic history."

Really looking forward to playing as part of the Big Christmas Lights Turn-On in Croydon on Thurs 13th Nov from about 2pm until the early evening. O ye! /;{>

Croydon remembers
Everyone is welcome to attend the Multi-Faith Service of Remembrance on Sunday 9 November, 10.45am at the Fairfield Halls. This will be followed by a wreath laying ceremony at the Cenotaph in Katharine Street at 12.15pm.

Letter to the Editor: What is Walthamstow doing right?

Letter to the Editor: "Most Croydon Guardian readers will know our splendid Lloyd Park here in Croydon, donated to the town in memory of Frank Lloyd by his daughter and son-in-law after his death in 1927."

This morning is brought me to the office the sad newes of “The London,” in which Sir J(ohn) Lawson’s men were all bringing her from Chatham to the Hope, and thence he was to go to sea in her; but a little a’this side the buoy of the Nower, she suddenly blew up. About 24 [men] and a woman that were i…

President Barack Obama visits Stonehenge on his return home from the NATO summit in Newport.

THE Whitgift Almshouses, Addington Palace, St Mary's Church – all among Croydon's stable of listed buildings. Now, to that roll call, add an old diving board in the middle of a garden centre. ...

In Memory of Geoffrey Myers, one of our members. This lovely seat is in Ashburton Recreation Ground Bingham Road.

In Memory of Geoffrey Myers, one of our members. This lovely seat is in Ashburton Recreation Ground Bingham Road.

Hey, Give you the heads up, Pop up #Croydon is publicly launching on 18th September 2014. More details coming soon.

Not long to wait for the Autumn/Winter season of talks and excursions! Let us know what fun heritage and natural history places you have been to!

This year’s excavations at the Romano-British settlement at Bridge Farm, near Barcombe Mills are due to be completed this week and the site can be visited on Sunday 10th August when tours of the site will be given at 11am, 12 noon and 1pm. For volunteers there are still plenty of features to be completed […]

Remembering the fallen people of Croydon.
Lights out tonight between 10.00pm & 11.00pm.

Remembering the fallen people of Croydon.
Lights out tonight between 10.00pm & 11.00pm.

Bored with the lovely weather? Well just in case you are at a loose end there is a great new August newsletter just out! If you don't already receive one strit to your inbox or you think your email address is wrong, Message me to be added. And don't worry, all newsletters are sent blind copy for your privacy.

Bored with the lovely weather? Well just in case you are at a loose end there is a great new August newsletter just out! If you don't already receive one strit to your inbox or you think your email address is wrong, Message me to be added. And don't worry, all newsletters are sent blind copy for your privacy.

MEMBERSHIP Membership is open to anyone interested in the objectives and activities of the society. MEETINGS Indoor meetings are held in the Small Hall of the United Reformed Church Hall, Addiscombe Grove, East Croydon at 19.45 unless otherwise statedin the programme. Members may attend any indoor or field meeting: visitors invited by members of the society are welcome. Members are expected to observe the various applicable Codes of Conduct during field meetings. Neither the society nor any of its officers or members can accept responsibilityfor the safety of anyone attending field meetings. You must make sure before the date of the meeting that it is safe for any child in your care, and make it known that you are intending to bring a child with you.

Be the first to know and let us send you an email when Croydon Natural History & Scientific Society posts news and promotions. Your email address will not be used for any other purpose, and you can unsubscribe at any time.

Other Museums in Croydon

FRIDAY 17th SEPTEMBER, 7-8pm: PRIMITIVE MONEY AND THE ORIGINS OF COINAGE. The Sussex School of Archaeology and History will be holding an online Zoom illustrated lecture on ‘Primitive Money and the Origins of Coinage’. Speaker: Dr David Rudling FSA. This talk, the first in our new 'Meet the Experts' series of 1-hour talks followed by questions, will explore the purposes of money in ancient times and in more recent non-western cultures throughout the world. It will also consider the wide variety of forms that ‘money’ has taken, from cowrie and other shells and items or pieces of metal and stone, to moulded or struck metal coins, from ancient China and India, Greek and Roman times, and the ethnographic record. This talk is suitable for archaeologists, collectors and those interested generally in the history of money. Event fee: £4-50p. For bookings and information about our other autumn term talks and courses: www.sussexarchaeology.org
Interested in Carole Roberts High St talk on zoom Weds 15th Sept 7:45pm
I know this is a bizarre question - but I am a tour guide and currently researching the 'history of dogs' in London - I just wondered if any members were aware of any statues, plaques, stained glass windows, coats of arms, sports etc in the borough that had a connection with dogs. I have set up an instagram account 'historicdogsoflondon' if anyone is interested in my research so far. Any suggestions from anyone would be very much appreciated. Historic Dogs Of London (@historicdogsoflondon) • Instagram photos and videos
As a life member of CNHSS, I thought you might like to support my project restoring the Eighteenth Century walled kitchen garden in Nork Park in Banstead. Nork House was built in 1740. We propose a program of archaeological survey, stabilization of the ruins, restoring paths, then replanting a heritage orchard and wildflower meadow with public seating. To support this project, please visit the page of Friends of Nork Park and click "LIKE" on the posting. You may wish to join our facebook group which already has over 800 members, where we discuss local history, archaeology and environment matters relating not just to the park but of the wider area. Everything from prehistoric archaeology to fauna, flora and conservation. I have enjoyed giving several talks to the CNHSS, and as well as being secretary of the Plateau archaeology group (part of the Surrey Archaeological Society) am an administrator of Friends of Nork Park and a local borough councillor. Thankyou for your support :)
A WW2 prisoner of war camp was recorded in Addington, Croydon in 1947. It was located on Shirley Church Road and i believe it was around the Golf Club House, (probably bell tents). Can anyone confirm the location of this camp - or have any details of it? THANK YOU! Malcolm - [email protected]
from another Croydon site, 1800c, Paul sometimes covers the issue of where the mill was
http://chng.it/7hZXZW5f
http://chng.it/7hZXZW5f
The Wallace Collection (Manchester Sq W1 )presents Forgotten Masters: Indian Painting for the East India Company, the first UK exhibition of works by Indian master painters commissioned by East India Company officials in the late 18th and 19th centuries. Guest curated by writer and historian William Dalrymple, Forgotten Masters presents an unprecedented opportunity to see these vivid and highly original paintings together for the first time, recognising them as among the greatest masterpieces of Indian painting. prices on applicaton
An inclusive community group for Shirley residents - with news, recommendations and other local talk. Please share with residents you know: https://www.facebook.com/groups/732519020549094/about/
CONFERENCE PREVIEW 'Old objects, new meanings?: Bronze Age items in Iron Age hoards' (Rachel Wilkinson, University of Leicester/British Museum) Out-of-time’ objects, i.e. the discovery of already 'old' objects with later contexts, has been noted across multiple periods (e.g. Bronze Age metalwork in Iron Age hoards or Roman artefacts in Anglo-Saxon graves). This paper will build on previous work on Bronze Age objects within Iron Age contexts (Hingley, R. 2009. ‘Esoteric Knowledge? Ancient Bronze Artefacts from Iron Age Contexts’, PPS 75, 143 – 165) and examine the motivations for their inclusion alongside Iron Age miniatures within hoards buried during 800 BC - AD 100.
https://www.facebook.com/media/set/?set=a.812175065619822&type=1&l=08f455b7f5